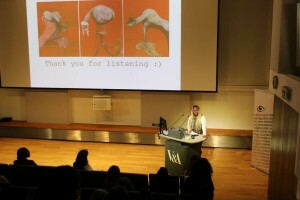 ARTiculation March 2022 at the Victoria and Albert Museum

Nicole Conteh in Yr12 represented St Michael's in the annual ARTiculation Public Speaking Competition. She earlier won her heat and went on to the London Regional Final at the Victoria and Albert Museum where she talked about Francis Bacon's Three Studies for Figures at the Base of the Crucifixion.
Nicole was praised by the adjudicator Alison Cole (Editor of the Art Newspaper) for her wonderful presentation, stating how impressed she had been with how engaged Nicole was with the critical and political contexts of the works. She went on to congratulate her for starting her talk with a detailed analysis of the work in question, before opening up her presentation to the themes of human pain and suffering, and how we, as humans deal with this, applauding Nicole for taking us on a ‘long journey.’

The competition was very tough and Nicole should be extremely pleased with her work, sadly however she did not get through to the national final.

Love one another, as I have loved you